Recently, ‘Roar’ was able to access elusive tickets to arguably one of London’s most controversial and moving Theatre productions this year: Dust. Performed and written by the talented Milly Thomas, and produced by Sara Joyce, this thought-provoking, touching and undeniably sad portrayal of depression, anxiety and suicide at the Trafalgar Studios poignantly made its debut at the peak of Mental Health awareness week. Sponsored by Samaritans, the performance serves to encourage discussion of such topics in order to demystify mental health at source.

Upon arrival in the tiny performance space, my friend and I steeled ourselves for an intimate, perhaps almost intrusive experience (we had been given a heads-up regarding the intensity of the 75-minute, unbroken one-woman monologue depicting the protagonist’s suicide): we were not disappointed. To a deeper extent than I ever thought possible, Thomas genially drew us in from her opening sentence: “I think this is the end.” Thomas’ frank and witty portrayal of Alice, paired with the deployment of a pertinent sense of realism throughout, ultimately beguiled me into a sense of revelatory interiority into the protagonist’s thoughts and life (or death, more accurately), and a sense of access that seemed almost intrusive. Never before had I experienced such intimacy from a single performance.

The play begins with Alice, played by Thomas, unveiled and forthright in a flesh-coloured bodysuit. She awakens seemingly as a wraith: people examine her lifeless body as it lies on a stainless-steel table in a morgue, dead by her own hand. Thus, the intensity of the subject matter is approached fearlessly from the start, with a stark privation of the ‘niceties’ of traditional theatre. A deliberately sparse performance area from Anna Reid (just three mirrors and a long narrow table) and neutral use of costume allows the audience to build a raw and honest relationship with Alice from the outset: perhaps Thomas’ refusal to ‘dress up’ is emblematic of her ultimate attempt to unveil and demystify mental health discussion.

Furthermore, this unbiased and ‘blank-slate’ set-up also allows Thomas to utilise the space in a way in which she, as Alice, can convincingly examine how her suicide impacted her close family and friends: the grief they resultantly experience in the aftermath plays out painfully on-stage in front of us. In addition, the audience is able to build an objective view on the situation by the very ‘faceless’ portrayal of family members, allowing perhaps for deeper resonance with viewers who empathise with any of the protagonist’s thoughts and feelings, truly emphasising the poignancy of the performance.

Another striking and unexpected element to the play is its bold, dark and coruscating humour. Whilst viewing her own funeral, Alice looks at her own corpse – “open coffin, bold choice” – and remarks “I look ready to suck a dick not be laid to rest”. Thomas’s darkly comic dissection of the isolating mental malaise that leads to someone committing suicide serves to debunk the unapproachable nature of the subject matter from within. Inspired by Thomas’s own struggles with her mental health and her desire to talk about this taboo subject more openly, the actress has said that the nature of her depression is that she cannot find a reason in it, and perhaps the fact that there is no obvious reason why Alice became so depressed is truly demonstrative of this: depression is a mystery – one person’s suffering is another’s blindspot.

As Thomas poignantly reminds us at the plays close, Dust discusses an issue that is “literally killing our young people.” By linking the production with the charity the Samaritans, the writers acknowledge the valuable way in which theatre can be a voice for change: we may actively participate in change and progress surrounding such topical issues as mental health and depression. The play’s pace, subject matter and delivery are unforgiving, yet vital and glorious. Ultimately, Dust represents Hope: a hope for change, a hope for truth and open discussion and a hope for life. 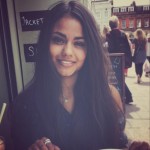