When second-year History students were presented with their dissertation modules, many students were dismayed at the lack of diversity in the module choices offered. Most final-year students undertake this module to complete their final thesis project. Nearly all these modules focused almost exclusively on European or Western history.

At the time of this article’s writing, there are a total of 15 dissertation modules available to History students (one cancelled). However, there are only 4 modules that cover non-Western parts of the world. They include:

It will come to any readers’ notice that large parts of the world are left out. These include the whole of the Caribbean, South Asia, South-east Asia, and the whole continent of Africa. Furthermore, only 2 of these modules are from before the 20th century. Granted, these regions are covered in the rest of the modules, but only marginally. Students who want to specialise in other parts of the world are left with no other choice but to fit their dissertation within the limited choices that they have.

The History Department prides itself on its diversity, particularly its receipt of the Athena Swan Bronze Award. But this Eurocentrism in module selection raised some eyebrows in the newsroom, so Roar decided to find out how diverse the History Department actually is. A few of the top reasons for a lack of diversity in module choices can be linked to a lack of interest in picking non-Eurocentric topics among students, restrictive or compulsory module choices, and sometimes even timetable clashes. However, we discovered that a more prevalent reason was the lack of diverse and inclusive teaching staff. Below are our findings.

There are a total of 75 faculty members in the History Department at King’s. According to the filters, the staff are divided into 9 categories. These are Academics, Affiliates, Alumni, Emeritus Staff, Visiting, Researchers, Research Fellows, Professional services staff, and Teaching fellows.

There are a total of 62 permanent-teaching staff. Out of those 62, 2 members are of BAME descent. People without personal portraits were Google searched, and if suitable portraits arose with credible handles, they were included in the results. That makes roughly 1/15 or 6.6% of all the History Department Faculty members of BAME origin.

To put this in context, we conducted research on two other University of London universities – University College London (UCL) and The School of Oriental and African Studies (SOAS).

The History Department at UCL’s People page has been divided into 9 types of staff. These are Academic Staff, Emeritus Staff, Professional Services, Research Associates, Teaching Fellows, Teaching Assistants, PhD Students, History Society, and Visiting Staff. Each permanent staff member has a comprehensive page for themselves.

UCL’s History Department has a total of 38 Permanent Research Staff, out of which 5 are of BAME descent. Therefore, roughly 13.1% of the Faculty members are of BAME heritage. As for the non-permanent teaching staff, the diversity make-up is as follows: 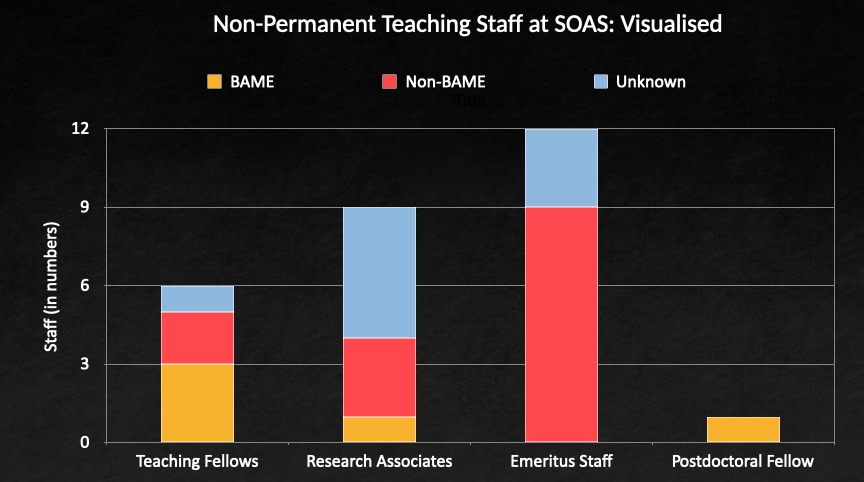 The History Department at SOAS falls under the broad umbrella of the School of History, Religions, and Philosophies, according to the History, Religions and Philosophies Staff page. The Department of History has been given special importance in the analysis of the BAME staff structure. Most Faculty members have a personal portrait, but ones without have been included in the list as “Unknown”. Due diligence research suggests that the Unknown sample is not statistically different from the overall sample, but we are open to comments and verification on this. 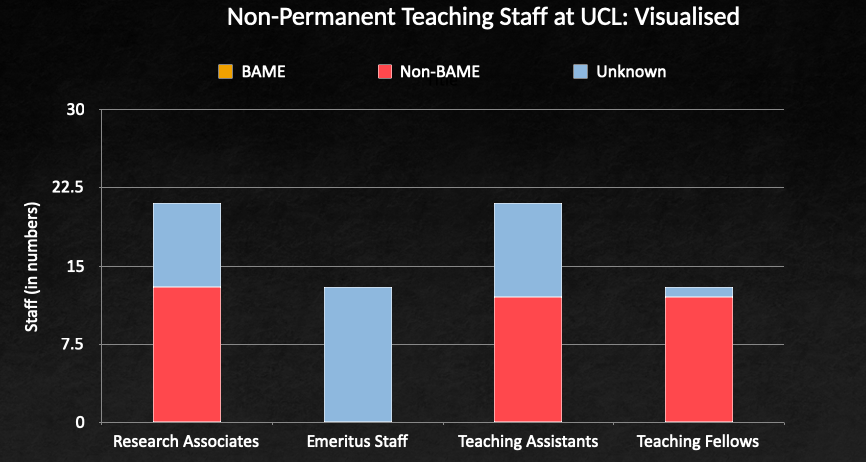 We also found that two of the people included in our list were not technically a part of the History Department. Instead, they taught as visiting professors or were a part of a different Faculty at King’s. Another member was under a casual contract and their contract ended as of July 2020. Lastly, the fourth member of our list is on leave and was replaced by a BAME Lecturer. We were later notified in a separate meeting that the latter Lecturer does not work with King’s College London anymore.

Moreover, we found that while the History Department at King’s does have specific divisions like UCL and SOAS in terms of teaching and non-teaching staff. However, these divisions are not clearly listed. One would have to go to the People page and manually filter the list according to “Role”. UCL and SOAS’s Department pages provide filtered information. This is why we were unable to give specific figures for KCL’s non-permanent teaching staff.

While accessing the King’s Staff page, we found that some of the staff was missing from their filters. We were able to confirm this by directly speaking to the Teaching Fellow in Modern Chinese History that was missing from the list. They told us that it was possibly an admin error. However, the Teaching Fellow was also on a casual contract. This information begs the question of whether the Department did not include the Fellow because they were under a casual contract.

We were only able to spot this case, but we wonder if more staff were not included in the list. To provide a more comparative and visual look, here is what diversity and inclusion among the staff at KCL, UCL, and SOAS look like: 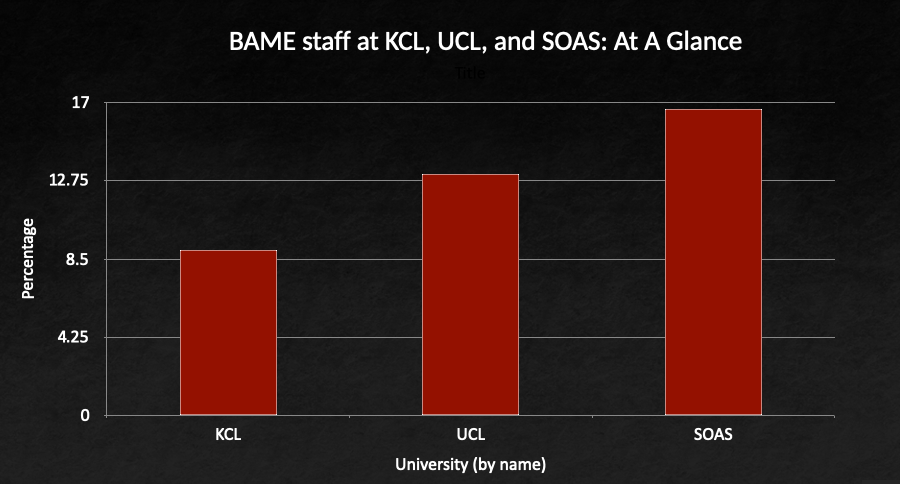 One must take the above graph with a grain of salt, though. While SOAS does have the greatest amount of diversity by percentage, its proportional representation isn’t commendable. The same goes for UCL. Having said that, KCL and UCL have more staff than SOAS does. Additionally, SOAS is also a university geared towards non-Euro/Western-centric histories.

This data tells us that the lack of BAME inclusion and diversity among staff members – and hence among modules – is a systemic issue. Given that non-BAME staff are just as qualified at teaching, the lack of BAME representation at top universities in the capital is eye-opening. This is surprising since only 44.9% of the London population considers themselves as White British. The situation is a disservice to students and staff. It must change.

Ultimately, we reached out to the College to confirm these numbers but were unfortunately not provided with any information.

Local Places to Visit in London