Professor Peter Neumann has been accused of Islamophobic bullying after targeting a Muslim academic on Twitter in the wake of the most recent terrorist attack in France.

An article in the Middle East Eye reported that Peter Neumann, of the Security Studies and War Studies Department, took to Twitter to “intimidate and harass” Tarek Younis, a junior lecturer in psychology at Middlesex University, and a Muslim. A screengrab from the Middle East Eye shows that Professor Neumann, after a previous interaction in which Neuman was also accused of Islamophobia, tagged Tarek Younis, asking him to “share your views” and tagging his employer, Middlesex University.

*In the Twitter thread from two weeks prior, Younis accused Neumann of Islamophobia for suggesting that terrorism was leading to the “gradual implosion of French society.” 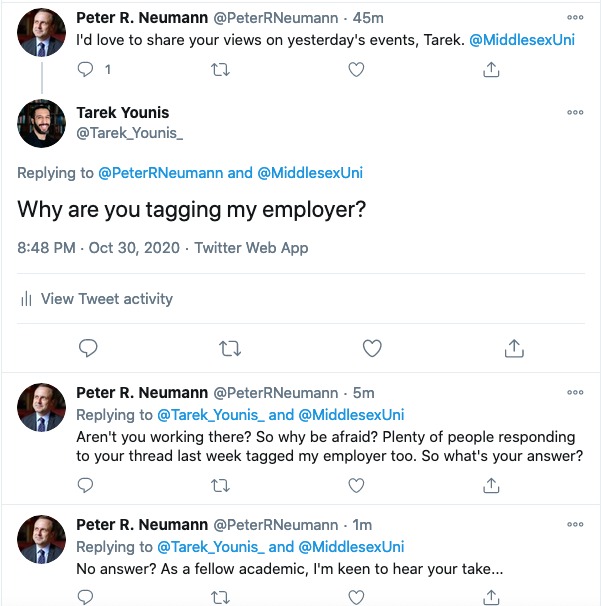 Furthermore, when Younis raised the issue of whether France’s divisions are attributable to factors other than terrorism, Neumann allegedly responded, “Nothing justifies killing innocent people. I hope we can at least agree on that. Or do we not?”

Tarek Younis has said, “This is clear bullying, given fear was his unprompted expectation. But given he’s a counterterrorism professor questioning me (a Muslim) on a terrorist attack while tagging my employer, this is not ‘simply’ abuse. In fact, it’s a pretty open and callous threat to my employment”.

A KCL spokesperson told Roar News, “We are aware of a complaint regarding the conduct of a member of our staff. We do not condone inappropriate or abusive behaviour. This is being taken very seriously and we will be carrying out an investigation.”

An open letter in support of Younis is calling for an investigation and “measures to ensure that staff and students at Kings College London are adequately protected”. The letter has already been signed by 19 staff, students, or alumni at KCL, amongst many others. It condemned “clear and unequivocal display of Islamophobia” with “unprompted questions on the Nice attacks.

“Coming from a renowned counter-terrorism professor, Neumann is clearly attempting to provoke conflict between a Muslim academic (who writes on terrorism) and his employer. There is no justification for this egregious display of behaviour to harm Younis’s employment.”

Professor Neumann’s unprompted tweets towards Younis come after high-profile interviews with France 24 and The Economist.