Contemporary artists are taking up internet memes and glitch sequences in a political economy to disseminate commentary on a digital landscape. A new pathway of digital art has emerged alongside facets of popular culture.

German-American internet artist Peekasso is an odd find in the realms of digital and glitch art. He creates psychotropic GIFs and internet memes of heavily Photoshopped cultural icons, containing ideological statements ranging from the subtle and thought-provoking to the politically incorrect, over-the-top, and unabashedly honest. He ignites an avalanche of strobing fluorescent colours that juxtapose the serious iconography of the subjects and graphic-text of the GIF.

Peekasso’s work is made for the counterculture of the internet. Far removed from censorship, his visually aggressive GIF style plays into the unapologetic digital culture of today. Peekasso (real name Peter Stemmler) reduces complex social problems into a guise of hyperactive visual silliness (dadaism), making nuanced references to current issues and happenings across the internet. Little personal information is available about the artist, providing an alluring mystery that fuels the striking anonymity of his work. This contributes to the ambiguity of the core message of his art, which acts as an anonymous voice for the internet counterculture.

Peekasso has racked up an extensive library of works. According to his GIPHY profile, there are around 2100 uploads of his art. Some notable examples include: ‘You are welcome America’; ‘Don’t normalize Fascism’ and ‘The Mask Is The Virus.’ ‘You are welcome America’ suggests parasitic control of former US president Barack Obama as a figurehead by the US government. It is situated as a potent symbol of American democracy to appease the Black population and reignite trust in the US political and economic systems, and compliant obedience amongst the minority groups.

‘Don’t normalize Fascism’ is perhaps a critique of the rising influence of all-right, fascist and conspiracy theorist groups like the Anti-Vaxxers or QAnon, fuelling disinformation, misinformation and fake news about the coronavirus during Covid-19. Also, it may relate to recent news of parties, politicians and governments using the pandemic to their advantage. MIT Technology Review presented emerging research that points to the coronavirus pandemic; they highlighted the use of the pandemic as an excuse to restrict internet freedom in various countries around the world. Journalist Monica Piccini emphasised the increasing corruption in the Brazilian government, where right-wing populist president Jair Bolsonaro has made coercive claims to use the pandemic as an excuse to intervene in all Government ministries, the Federal Police, the Armed Forces and the Brazilian Intelligence Agency ABIN.

‘The Mask Is The Virus’ taps into conspiratorial thinking. It posits the predictions of George Orwell’s famous book, 1984, coming to fruition in the context of this pandemic. These absurdist images embedded in familiar iconography, double as metaphors for the current issues in society.

Peekasso takes complex political and social tokens of present-day and past figures, and refashions them into a palatable contemporary media. He employs GIFs to expose the crux of systematic infrastructures, dominant and alternative ideologies, and their cultural implications. 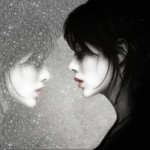