Earlier in October, Japanese fast-fashion giant Uniqlo released a new advertisement to promote its new campaign, Love & Fleece. However, this advertisement is in the center of the historical and political controversy in Korea.

At the end, Apfel states: “I can’t remember that far back.” If an English speaker listens to the advertisement in English, it is difficult to point out what is controversial. However, in the Korean version of the advertisement, Uniqlo translated this last statement as “맙소사! 80년도 더 된 일을 기억하냐고?”, which in English, can be translated to “Oh god! Are you asking I remember things from more than 80 years ago?”

80 years ago, the Empire of Japan forcefully occupied the Korean peninsula. During the forced occupation, Korean women, especially young girls, were often kidnapped or levied by the Japanese Imperial Army and had to suffer as the sex slaves for the army. Victims of Japanese wartime crimes are still alive and have testified the tortures and sexual violence they experienced.

Accordingly, the last statement of the advertisement and its Korean translation shoots straight at the heart of Koreans, and has been met with protests. Uniqlo may not have intended to offend its Korean audience, it certainly feels like the advertisement is making fun of how Korean victims of sexual slavery can remember what happened more than 80 years ago. And it is not just Uniqlo that denies Japan and Korea’s joint and painful past.

The Japanese government has continually denied the violation of human rights and women’s rights during the forced occupation. Rather than a sincere apology to the former sex slaves, Japanese politicians, like LDP lawmaker Yoshitaka Sakurada, have repeatedly denied or degraded the existence of Korean sexual slavery victims and sexual violence during the occupation.

In other words, violence towards Korean victims has never ended. Through the degradation of the sex slave, second-hand violence affects not only the victims, but Korean citizens in general. The Japanese government should stop denying the facts, and take concrete action.

We, as students, can also contribute to solving this issue. We need to support the Korean victims of sexual slavery, and learn correct historical facts. I have understood many students outside of Korea do not know the history of the “comfort women”, although it is one of the most significant crises of sexual violence in contemporary history. The story, that is not only a part of Korean history, but a part of women’s history, has not been taught to international audiences sufficiently. This needs to change.

Resolving this issue will be a milestone on the path to women’s equality internationally, and will reaffirm that women’s rights and human rights have to be respected. The majority of Korean sexual slave victims are now in their 90s – we are running out of time.

The advertisement by Uniqlo only demonstrates that people are forgetting the painful chapters of history as time passes. The international community needs to pay more attention to this issue before it disappears from our minds. And we, as the new generation of the international community, need to be aware of the unacknowledged history of the Korean wartime women, and ensure it never happens again. 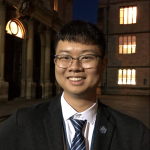